Travelling in a lift on a daily basis might be considered as a privilege though it comes with its own quirks. I wanted to write an article on this topic in the fifth semester itself. But that was still the beginning. There was not much that I could write about. However I think I have picked up enough instances to finally write this piece.

Approximately an average guy spends at least 30-40 minutes waiting/travelling on the lift in my hostel.  There are two lifts in the hostel with a capacity of carrying about 10-12 fully grown men. Since we guys are underfed and quale, up to fifteen guys travel in it the peak hours. I might not be quoting exact values, but am trying to estimate.

There are six floors in our hostel. The lift does not stop at third and second floors. I felt a bit uneasy about in the beginning, but later found out that it was a good idea. Some of the buttons don’t work. And there are few emergency numbers written in blue ink on the control panel. The transparent half on the other side enables you to the inside of the hostel. Very often you can see internet refugees sitting out to claim their share of online bounty.

I thought that travelling in the lift was going to simplify my life and save time. But the first lesson that I learnt in life was this. Nature has the knack of proving the exact opposite of your convictions. The lift is always at the farthest end possible 9 out 10 times on an average. It takes maximum time to reach your end whenever you need it the most.

It gets pretty interesting to watch people when the lift gets overloaded. The guy who got in the last often gets down. But sometimes we have to show some gaanchali towards some gaanchali guy. That guy is pushed out purely on the basis of popular vote. And then sometimes we love some of our buddies too much and we won’t let the guy get down. We hold him tight and take him to the top most floor just to piss him off. If you didn’t have good day just make sure that you press 4 and 5 after getting down at 6. The sadistic pleasure to know that the guy on ground floor waits for extra five minutes makes you feel better in a crooked way.

Sometimes the kindness of strangers touches you when they hold the lift for you just in case you are a few meters short. However those acts go un-thanked on a daily basis. To be honest, I don’t think people should do all that. I often pray that the guy running towards the lift misses it by a jiffy. I pray harder if I know the guy running to the lift. 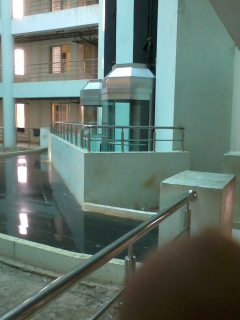 Hostel lift is the de-facto news wagon. It is literally a travelling news wagon. You get to know a lot of things about the college if you belong to the say-no-to gossip gang of individuals. You get to know about which branch people have which test, which branch classes got cancelled, etc. Sometimes you get to know the weird style of electrical professors who use a particular double meaning gesture to explain “system excitation”. Then there are the intern opening news, who-got-which-intern news and what-happened-in-which-branch news. If you are the average kind of guy who has got nothing, you really feel bad for yourself. Trust me, it hurts.

Then there are moments when you are travelling in the lift with a “dick” i.e. a guy with whom you have had a bad experience. And many times you don’t know where to look or how to avoid that person. The best option in such situations is to pull out your phone and run through some unwanted stuff.

Last but not the least, I must mention the sweaty and smelly guys, the ones who rarely allow water to run on their skin must be given due credit for their bindaas attitude. But that is not cool. That is nasal terrorism. I would say “Use the stairs dude” if I had the balls to say that.  The raw smell of tobacco from certain kind of unique individuals makes you feel like closing your nose. But that would be a bit too offensive if you do it on their face.

Seriously, I don’t know how to end this piece. I am out of touch these days. Sorry if I have disappointed you. I will try better next time. Till then, see you folks.