Ever since I learnt this word, I have adored it. On many occasions, I have found something beautiful whenever I have been chasing something that was equally futile or pointless. Something of that sort happened last Saturday.

What was I searching for? Don’t ask me.

I write here about what I found.

When I entered the first floor of the Chitra Kala Parishat , I was stopped by three aloof ladies who were sitting on the staircase and leisurely tying a garland. They casually shot some commands at me.

I mumbled brief answers and kept the bag on the table as instructed.

One might expect that an art gallery with such a fine collection would be maintained by an erudite staff well versed in artistic thought. However, the caretakers of these treasures were ordinary people who were too busy with daily struggles of existence. Too busy to ponder over the difference between abstraction and fine art. The stark contrast between the aura of the hall and the aloofness of the housekeeping staff was something that could not be ignored.

The paintings that hung on the walls of the first room (called Kejriwal Gallery) belonged to the 19th and 20th centuries. They were mostly the creations of  Bengali artists. Most of the paintings had no boundaries or clear motives. It was as if someone had decided to splash some colors on a moody afternoon and assigned a title for each of them on a drunk Friday night. One cannot deny the fact that these are the kind of paintings that leave an impression on you.

In our failed attempt to make sense out of abstraction we do feel slightly dissatisfied with our own intellect. After a couple of minutes we give up on it and move on. This is not very different from the act of pondering about life and the outrageous things that happen in the world every day. We attempt to debate, interpret, and discuss the causes and solutions. But in the end, the world is an enigma. It is not possible to have a definitive handbook to understand this world.

Nevertheless, some attempts to know more about the artists and the art were made. I ended up on the Chitra Kala Parishat website and found that this collection was donated by a certain gentleman named Mr. H.K. Kejriwal. Unfortunately this surname has been associated with the lunatic CM of Delhi in recent times. The website says:

Gallery one and two of the Kejriwal collection hold an extensive number of works dating from the 1800’s to the 1950’s. Works by the Bengal school of artists, the Avant Garde and folk paintings are the highlight of these two spaces. The folk paintings, Kalighat drawings, Santhal Pat (scrolls) and Patta Chitra rolls are housed in gallery one. Also there is a collection of caricatures by Gaganendranath Tagore. This gallery holds work that is distinctive of the Nationalist art movement.

Abstraction might frustrate our faculties, but fine art delights and entertains the eyes of a normal person. One does not have to be a degenerated philosopher to interpret fine art. The proportions, perfection and grandeur of a portrait or landscape is something that the ordinary eye can appreciate instinctively. You have to be a mad man if you can’t appreciate fine art.

The next room was filled with paintings of a certain artist called SS Kukke. His paintings of famous temples in India filled the room that preceded a collection from the Mysore school of art.The Mysore school of art describes nuggets of mythology like ten avatars of Lord Vishnu or feats of the goddess Chamundeshwari. An art critic might be able to provide a more detailed and erudite summary of the same. I can only say that they are beautiful without doubt.

I must confess that I skimmed through a couple of foyers as I could neither understand or appreciate some sculptures and paintings. And yes, I had to keep a check on the time since I had a German class to attend.

The third delightful room I entered was the Roerich gallery. Dr Svetoslav Roerich decided to donate about 300 paintings to Chitra Kala Parishat in the 1990s. The Chitra kala Parishat took an equally delightful decision to put them on display in the gallery permanently. The website says

The word Roerich means ‘Rich in glory’, and true to this Dr. Svetoslav Roerich has enriched the Indian art world with his artworks. 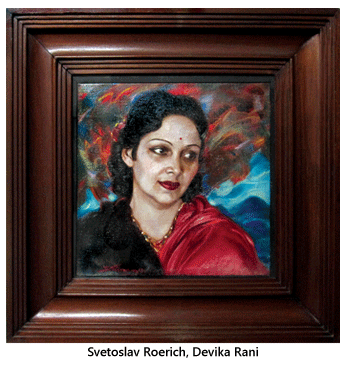 Mr Roerich seems to have mastered both portraits and landscapes. For me, the most beautiful painting in the room was that of Devika Rani, an actress who was also the grandniece of Rabindranath Tagore (whom Roerich married eventually). I need not underscore the fact that she is one of the finest examples of art created by nature.

I also learnt that Mr Roerich was awarded the Padma Bhushan during his lifetime. The artist lived in Bangalore for a long time and died here in 1993. His Wikipedia page doesn’t explain how he ended up in India,but it claims his paintings of Nehru and Indira Gandhi adorn the central hall of the parliament.

I could have easily spent few more hours in the museum, gaping at these exquisite strokes of artists whom the mainstream has either forgotten or ignored. I left the place with some thoughts about the importance of abstraction and fine art.

For an individual to have a healthy perspective about things, both abstraction and the fine print are equally important. While the former is hazy in comparison with the latter, the two complement each other in the long run. When you look at the larger picture of life (or anything for that matter), it is abstract. You can’t put a finger on it and say this is the definitive purpose or definition of life. However, some days, few moments, certain memorable gestures, acts and words that one might say or hear can be like a work of fine art.

Another mocking voice inside me chuckled sarcastically at my attempt to give a philosophical twist to the whole episode.