Book Review—Pearl by the River by Sudipta Mitra

Pearl by the River is a  well researched, detailed account of the life of Nawab Wajid Ali Shah of Awadh. It speaks about the story of British takeover of Awadh from the Nawab; the subsequent fight for his reinstatement fought by the Nawab’s mother; the 1857 mutiny in which his wife Hazrat Mahal fought bravely and his little kingdom on the banks of Hoogly river. 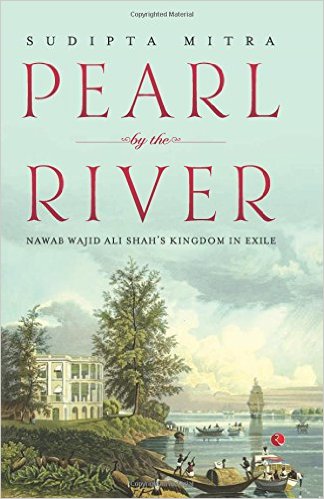 When the reader finishes the book he/she might feel overwhelmed and impressed  by the variety of interests and passions that the Nawab had. His aloofness and fatalistic approach towards life that made him seek peace in arts, music, romance, animals are explained in great detail . The poignant presentation of  myriad contradictions in the story of Nawab ensures that this book is not reduced to a collection of historical facts.

Sudipta Mitra brings out details of the ouster of the Nawab that are generally ignored in history textbooks.

There are many engrossing pages in the book. However, the scene where the Nawab rejects the unjust treaty, hands over his crown to the  Outram ( a British official ) is my favorite part of the book.

Though the writer paints a picture of misfortune of the king and the injustice meted out to Awadh, he does not point out the fact that kings had to be strong to retain power. There seems to be no analysis of the incompetency of the Nawab or his predecessors which lead Awadh to such a poor position. The author speaks about the public opinion against the company in London and the efforts made by the Oudh commission to reinstate the ousted Nawab in subsequent chapters.

The fateful revolt of the sepoys in India coincided with the meeting of Aulea Begum with Her Majesty. One encounters the decisive role played by fate in the annals of history. The narrative of the failure of Oudh commission and valiant fight put up by the Nawab’s wife Hazrat Mahal in the 1857 revolt has been presented lucidly. The reader finds an inspirational story in the depiction of  Hazrat Mahal even though she is on the losing side.

All this creates a good deal of emotional imagery in the mind of the reader. But historians and biographers of charismatic kings should also analyse another important question. Should rulers who wield power with someone else’s blessing deserve the sympathies of the public when it is snatched away? As Dr. Kalam rightly said : “In this world, fear has no place. Only strength respects strength.” One can replace the word fear with weakness or subservience and still extract a vital lesson that could have saved the Nawab’s kingdom.

The second half of the book speaks in depth about the cultural heritage that the Nawab had nurtured in his past and carried to Metiyaburj, the locality in Calcutta where he spent his years after being release from Fort William. His amorous relationship with women and generous expenditure on arts, animals and building are explained in great detail. One is convinced that Nawab Wajid Ali Shah, knowingly or unknowingly has embraced the philosophy of Charvaka .

[Till the time you are alive live happily. One should drink ghee (a sign of luxury) even by resorting to debt.]

Though the Nawab had enough wealth when he was the ruler of Awadh, he continued to lead a luxurious and amorous life even after he was reduced to the status of a pensioner of the Government. The author presents the religious and amorous faces of the Nawab, allowing the reader to decide whether he was ‘good’ or ‘bad’. It would have been appropriate if he had quoted Oscar Wilde in his concluding chapter to resolve this difficult dilemma.

“It is absurd to divide people into good and bad. People are either charming or tedious.”

The book convinces that people can be charming even if they can’t be called ‘good’ or ‘bad’. Our inability to understand this fact puts all charming people to a great deal of trouble and pain. If you are unable to understand what I mean, you will have to read this book to find it out for yourself.